The big thing? Is noticeable and easily increased breathing capacity, allowing me to do more, push harder, and recover faster. There are no silly side effects or “buzz” feeling.  It’s just increased capacity.

Prior to last Enduro, I had never heard of the GO2 product. Coming third solo female, I was fortunate to receive a whole box of this wonderful product as part of my prize.

We had a long drive back to Melbourne, before heading back to Qld after Enduro.  Terry suggested taking the product neat every few hours, which I did quite religiously for the next few days.  After 24 hours, 110klms, 300 odd obstacles and minus temperatures my body and nervous system was in need of some TLC.

I must say that my recovery was very good. Considering I had close to three or four days straight in a car after the event clocking up kilometres on the road, I hate to think what I could have been like.  After taking it neat for the first few days I then added it to my water bottle and drank daily for the few weeks that followed as I mainly just walked, did yoga and tried to let my body recover.

On a training basis, I found taking the product prior to a big workout I could feel a noticeable difference in performance during the session.  Others also would comment at times that “I just had something extra”.  I have also noticed my runs easier and faster if taking the product prior. Just recently I took it before a 5klm run and had a new PB even though I hadn’t run for quite a few months.

The big thing? Is noticeable and easily increased breathing capacity, allowing me to do more, push harder, and recover faster. There are no silly side effects or “buzz” feeling.  It’s just increased capacity.

Definitely a product to try. As it’s natural there are no highs or lows, just results. I am a big believer it is a useful product for all sports, recovery and everyday life.

Below: Tiffany(L) on the podium with her Big Box of GO2 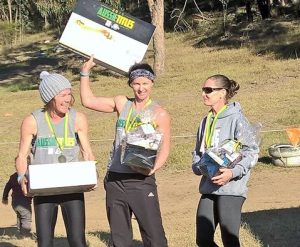